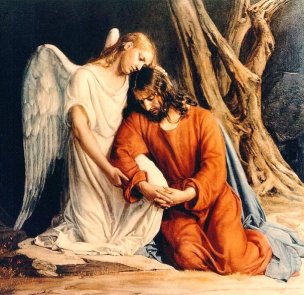 My dearly beloved daughter, the greatest horror I witnessed in My time in the Garden of Olives was the scourge of sin in the time of the end. During the vision, shown to Me by Satan, I saw the fall away of mortal man from God’s Laws. He, the evil one, showed Me terrible images; tempted Me with every reason why I should turn away from the Will of My Father. He wanted to torment Me and so he displayed the power he would still have, despite My death on the Cross.

I was shown the final destruction of My Church on earth; the seizure of power within it by masonic sects; the immorality of man; the lack of shame on the part of God’s children, as they engaged in vile sins of the flesh; the murder of innocents and the falling into error by those who profess to speak in My Name.

So powerful is Satan that he planted doubts in My Mind about My being the Son of man. I, in My Divinity, could not succumb to sin but I tell you this, so that humanity can understand how evil can tempt you to turn away from Me.

Satan does not present evil in the most obvious ways. Instead he disguises evil as good. He is cunning and can trick even the most holy amongst you, into believing that a lie is the Truth.

As people fall away from My Teachings they will embrace sin willingly and with greed in their hearts. Without direction they will always fall from grace. When My Name is being wiped off the face of the earth, man will be unable to find God.

Whatever religion you follow it does not matter because your only route to God is through Me, His only Son. Because of My death on the Cross, I saved you – including every man, woman and child alive in the world today- from the fires of Hell. If you do not accept this then you cannot enter the Gates of Paradise. It is only through the Son that you can be presented to the Father.

Reject Me, Jesus Christ, and you reject your salvation.

How little you have learned about sin and the way in which it separates you from God. The spread of sin has never been so rampant since God created the world.  You sinners have reached new depths, which disgust Me. You have exposed even the little ones, who were entrusted into your care, to behave like demons. You lack charity, love and compassion for one another and yet many of you display your acts of faith for the world to see and admire. Just as the Pharisees dictated the Laws of God, but did not practice them, nor did they show humility, so too, will those of you who say you come in My Name cave in to the sin of pride.

So much do you still need to learn about My Voice and My Teachings, which still fall on deaf ears. Then there are those who spend all their time proclaiming their knowledge of God, say they know the prophecies, which have still to be revealed, but know nothing.

Were it not for My great Mercy you would be unfit to enter My Kingdom.

The time has come for all those who claim to guide God’s children, in the ways of the Lord, to beg Me, Jesus Christ, for the Gift of Humility.

It is time for you to listen to the Truth, as it was given to you, for you don’t have much time to redeem yourselves in My Eyes.